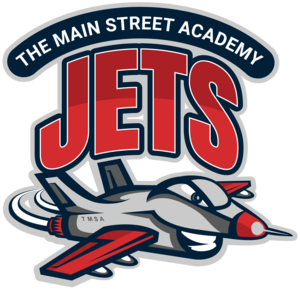 Plus, meet the designer of the Jets mascot logo, Jerome Thompson

On Wednesday, September 11, 2019 the TMSA community voted on their new TMSA Jets mascot logo and the mascot logo that received the most votes was announced to the community at large shortly thereafter. Unfortunately, due to unforeseeable production issues, TMSA is not proceeding with the Jets mascot logo that received the majority vote on September 11, 2019 but the second runner up that was voted on the same day (logo enclosed). As such, TMSA is pleased to introduce our official TMSA mascot logo! Thank you for voting and selecting your school’s new and official Jets mascot logo! Jerome Thompson is a professional designer with almost 25 years of experience. Mr. Thompson graduated from Winthrop University with a Bachelor of Fine Arts in Graphics Communication. Directly after graduation, Mr. Thompson was employed by a local newspaper as a news artist and I went on to have a successful career in visual journalism. He then transitioned into the digital platform as a UXUI designer (user experience, user interface) for large corporations. Mr. Thompson is also a freelance designer and samples of his designs are available to view via CreativeExplanations.com.

Mr. Thompson has had a passion for designing since he was in elementary school. His elementary school teacher encouraged his class to do what they loved and by doing so they would never work. These words of encouragement stood the test of time for Mr. Thompson as he stated, “I never went to work a day in my life since I started my career in design. I am passionate about telling stories through visual communication.”

As one of three designers who responded to The Main Street Academy’s Request for Submission (RFS) to submit a design for the school’s new mascot logo Mr. Thompson commented, “It was a great opportunity to support TMSA in the most unique way, through my creative gifts. My vision for the mascot was to create an original character that will represent our school spirit and our student’s soaring potential in academics, athletics and all other school activities. It was important to create a mascot that will be easily identifiable amongst other schools.”

Mr. Thompson and his wife are proud TMSA parents who attend PTO meetings regularly. Mr. Thompson stated, “I am humbled and grateful to have this opportunity for my talents to represent TMSA. Out of all the achievements through the years, this is the greatest of them all! It is an accomplishment my son and I will look back on with pride to know his dad designed his school’s mascot.”