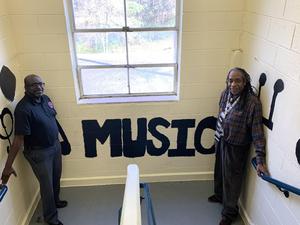 TMSA’s music department performs not only for the school, but for the community. Upcoming music performances include TMSA’s annual school-wide holiday program “Celebrating Holiday Classics” (the music department will perform classic holiday music) on Tuesday, December 10, 2019, as well as the drumline is participating in the City of College Park Parade on Saturday, December 14, 2019 and the handbell choir  performing at Greenbriar Mall on Thursday, December 19, 2019. Most exciting, 8 members from TMSA’s band are auditioning in the Georgia Music Educators Association’s Middle School Band All-State Auditions (Round 1) on Saturday, December 7, 2019 in Milton, GA.

TMSA’s music department also supports collaborative learning. Earlier this school year, kindergarten guitar players provided live, accompanying music as the school librarian read “Pete the Cat” to all kindergarten classes. TMSA’s music directors, Mr. Thomason and Mr. Lackey, main objective is to ensure that all students are exposed to and have an opportunity to discover music at an early age; as students may join the band as early as the 4th grade and participate in drumline as early as the 2nd grade.