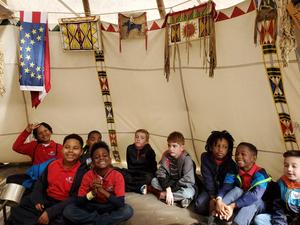 Early November 2019, The Main Street Academy’s 3rd grade scholars attended the Native American Festival & Pow Wow, the largest Native American gathering in Georgia, at Stone Mountain Park. This hands-on enrichment field trip provided an excellent opportunity for the students to make connections to what they are currently studying in their social studies classes. TMSA 3rd graders participated in Aztec dancing, sat in tepees, learned about tools used by American Indians, listened to stories, and gained more knowledge about the Native American history directly from Native Americans. The students were mesmerized as they learned a lot and made several connections to their own lives.

Special thanks to the TMSA parents who served as chaperones during the field trip.